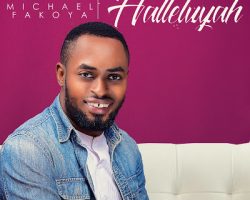 The young, yet talented singer, and songwriter boasts a soulful voice with range that most singers are unable to capture. His inspiration and knowledge of great musicians including Fred Hammond, Tye Tribbet, Israel Houghton and Tim Godfrey have all shaped his sound. Like all of his favorite artistes, Michael’s tireless devotion to music, plus his boundless enthusiasm on stage, are both captivating and hypnotic.

Michael’s musical background stems from his mother who was once a choir director and musician.

“Halleluyah” is the third single off Michael’s upcoming, untitled debut E.P. Michael continues to work on his craft by performing at several venues including some of Ibadan’s most iconic music venues like Jogor Center, Mauve 21 and Grace Cathedral. Michael’s fusion of Gospel and soul has turned electric into eclectic and is sure to take this artist to the top.